From Difficult Diagnosis to Happily Ever After: Meet a Couple Who Found Love Battling IBD

148
By the time she was in her 20s, Marisa Troy had endured numerous operations for ulcerative colitis. And when he became a new dad, Frank Garufi's life changed in ways he couldn't have imagined when his son was diagnosed with Crohn's disease. Then they found each other.
By Brooke Porter KatzOctober 21, 2019
Today's Top Reads Close
B

y the time Marisa Troy met Frank Garufi in 2013, she had already undergone 15 open abdominal surgeries to treat her ulcerative colitis, a disease that causes continuous inflammation and ulcers in the large intestine.

Garufi, meanwhile, had been raising his then 7-year-old son from a previous marriage who was living with another form of inflammatory bowel disease (IBD), Crohn’s disease, which is characterized by patches of inflammation in the digestive tract.

“I remember being taken aback by Marisa,” Garufi says of their initial meeting at an event to celebrate World IBD Day. “Her smile just lit up the entire room.” Troy recalls their first conversation being natural and easy. “It was like I had known him my whole life,” she says. “At one point, I wondered if I could be talking to my future husband.”

“I Am a Triathlete With Crohn's Disease”: Meet a Man Who's Been Living and Thriving With Inflammatory Bowel Disease for Half His Life

Since then, their shared experiences have helped them forge a strong relationship—and six years to the day they met, Garufi proposed in San Diego during the 2019 Digestive Disease Week conference. It was at this conference that Janssen Research & Development, LLC, part of the Janssen Pharmaceutical Companies of Johnson & Johnson, also announced data for a new treatment option for adults with ulcerative colitis.

To help bring awareness to IBD and the urgent need for innovations like this to help the 10 million people worldwide who live with IBD, we’re sharing the couple’s story of finding love while living with chronic illness. 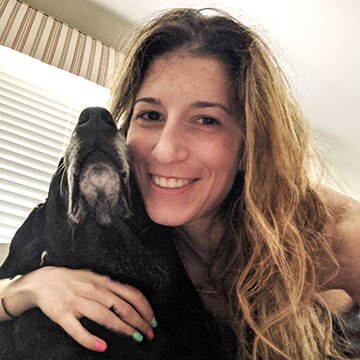 Troy with Holli, one of her three dogs

“A month before a big swim meet I had stomach pain and diarrhea, wasn’t as hungry as usual and felt tired,” she says. A gastroenterologist diagnosed her with inflammatory bowel disease, and prescribed medication, along with a diet of rice and saltines.

But it soon became clear that something more serious was going on, and two months later, her parents took her to a specialist, who put Troy on a number of medications before recommending the first of many surgeries—the initial one to remove her colon and insert a J-pouch, an internal reservoir that collects waste.

“I was told I would be completely cured and able to go on with my life,” she says. “But I had complications and spiked fevers on and off for about six months. I finally had a CAT scan, which showed an enormous amount of abscesses.”

Another surgery followed to remove the J-pouch, as well as Troy's rectum and anus, resulting in a permanent ostomy bag, which connects to the abdomen to collect waste. “After that I had a year when I enjoyed being healthy,” she says. “But at 17, I just couldn’t shake the reality that the ostomy was permanent, so I went on a mission to get rid of my bag. I discovered a pouch that could be inverted into the stomach, and had five more surgeries for that.”

The Resilience Rx: 6 Ways to Live Your Best Life With a Chronic Illness

When she was 24, Troy had another complication, and decided it was time to accept her reality of living with the ostomy. “I didn’t like it, but at least I knew I had tried everything,” she says.

A competitive swimmer since age 7, Troy ultimately had to quit the sport because of the physical toll that all of her surgeries, infections and complications had taken. It was a major blow, since swimming gave her "a huge sense of pride and confidence." But she found another way to make herself proud: finishing college. "It took me six and a half years on and off, including some summers, but I did graduate," she says. "There were many semesters where I'd take difficult classes, work my butt off and then have to take a leave of absence. But I finished."

Throughout her ordeal, Troy kept quiet about her illness; only her parents and brother knew the details. “I never allowed anyone to visit me in the hospital,” she says. “And I put on this fake persona because I didn’t want to seem like a downer. It took a lot of energy and caused anxiety.”

I got love and acceptance, and it made me feel like I could be myself and not worry about being rejected or seen as gross because of the bathroom stuff.

Finally, at 26, Troy felt like enough was enough—it was time to open up.

“Looking at social media made me feel like everyone was moving on in their lives,” she says. “But I wasn’t. I was stuck. At that moment, I couldn’t take being fake anymore.”

So she sat down at her computer for hours, writing a post on Facebook about what she had been through. The response was overwhelming. "I got love and acceptance, and it made me feel like I could be myself and not worry about being rejected or seen as gross because of the bathroom stuff,” Troy says.

From there, she was able to connect with others who live with ulcerative colitis, and started a blog called Journaling IBD. Today, Troy focuses on advocacy through InflammatoryBowelDisease.net and recently began working as a coach for ostomy patients.

“Sharing my story gave me purpose,” Troy says. “If I had to go through all of this suffering, at least now I’m able to help people.”

From New Dad to the Parent of a Toddler With IBD


From the moment his son came into the world, Garufi knew something was wrong.

“He was 2 months old when he started having blood in his stool, and he wasn’t gaining weight,” Garufi says. “I was at the doctor’s office at least every other day.” By the time he was 4 months old, the infant's file was five inches thick—and the pediatrician still could not figure out what was wrong.

Finally, when his son was almost 1, Garufi found a specialist. “He left no stone unturned, and for a while, my son was nothing but a pin cushion,” he says. “At the age of 3 and a half, it was confirmed that he had Crohn’s disease. I had no idea what it was so I started researching.”

But the diagnosis didn’t provide a whole lot of comfort—especially since none of the treatments they tried over the following years seemed to be helping. Around age 6, his son went into remission—but it was short-lived. “We had six months of him feeling really good, and then it all went downhill,” Garufi says. “We spent his birthday, Thanksgiving and Christmas in the hospital.”

Garufi hit rock bottom that year. “I was keeping a strong face for my son, but I was at my lowest point,” he says. "One night, I broke out my laptop. My friends were online, and one of them asked if she could do an on-air interview through Google Hangouts On Air with me about what I was going through.”

While I don’t wish IBD on anyone and pray constantly that there will be a cure one day, it’s meaningful that these challenging circumstances are what enabled us to come together and build a life.

“An amazing amount of people reached out saying they had Crohn’s,” he says. “It was eye-opening.” It was all the inspiration he needed to start "The Crohn’s Colitis Effect" as a Google Plus page, as well as the IBD Round Table podcast, where Garufi and other IBD advocates discussed related topics like mental health and finances. "It shocked me how much the IBD community grabbed onto it,” he says.

His son, who turns 15 in October, went into a period of remission in 2012. “He was able to be a regular boy, playing sports and barely missing school,” Garufi says. “I took him trick-or-treating, which he'd never done before. It was so nice to see my son as something other than a chronically ill person.” After a few setbacks along the way, he is still in remission today, with the help of two medications.

Overcoming Hurdles and Hardships as a Team


In the six years between the day they met and the proposal, Garufi and Troy have overcome more adversity than most couples see in a lifetime—including a particularly hard 2017, when Marisa underwent another ulcerative colitis-related surgery and Garufi's son had a serious bicycle accident that caused him to lose his colon.
Share
Did you like reading this story? Click the heart to show your love. 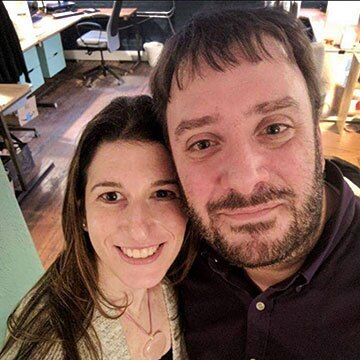 But through it all, the one constant has been their love for each other.

“I feel so lucky because Frank could relate to what I was going through from the beginning,” says Troy, who is currently in remission and focuses full-time on her advocacy work. “Both of our experiences have helped us be there for each other in ways that other people couldn’t be.”

Today, the couple loves spending time with their three Labradors, and both volunteer at a local animal shelter. They just got back from a cruise to New England and Canada, and can't wait to plan their next one. It hasn't always been an easy road, but being able to truly relate to each other only makes their bond stronger.

As Garufi puts it, “Marisa and my son, and me as well, have suffered in ways that most people could never handle. And while I don’t wish IBD on anyone and pray constantly that there will be a cure one day, it’s meaningful that these challenging circumstances are what enabled us to come together and build a life.” 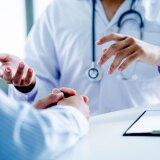 Are You Living With IBD?
Learn more about a treatment option for adults with moderately to severely active ulcerative colitis.
Go here